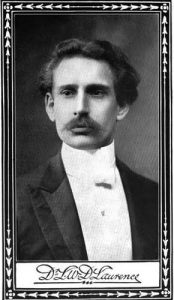 Lauron William De Laurence (Dr.) was a grand-commander of the Magical Art, occultist, paranormal philosopher, spiritualist, author of metaphysics, mystic, masonic wizard and venerable grandmaster… De Laurence was born on 20 March 1868 at Ravenna (Ohio), the eldest child of William and Mary (née Walker) Lawrence. He was married twice; – the first time was in 1897 to Orrie Eckert in Ohio and the second time in about 1905 to Pauline McAdoo in Illinois.

De Laurence was world-famous as an American author, spiritualist and established publisher of occult books and worldwide marketer of spiritual products. His publishing company (De Laurence, Scott & Co.) and spiritual supply mail order house was located in Chicago, Illinois. De Laurence was a pioneer in the business of supplying magical and occult goods by mail order. He wrote several occult books which include The Master Key, Sacred Magic, and many more while his greatest work was – “The Great Book Of Magical Art, Hindu Magic & East Indian Occultism”.

De Laurence was the Venerable Grandmaster of – “The Eastern Order Of Sacred Mysteries” which is the world oldest brotherhood of occultist and great adept. In early 1930 he was consecrated a bishop by the Spiritualist Arthur Edward Leighton (1890 – 1963), a bishop of the American Catholic Church (a church body founded by Joseph René Vilatte).

History recorded that De Laurence died on 11 September 1936 in Chicago, at the age of 68… His lifetime legendary spiritual works have brought him renowned recognition and his selfless iconic services to humanity have endeared his name to the whole world. In transition among the spirits, his works are everywhere on earth and his name stands high in the roster of independent and intrepid thinkers of all time.

This website uses cookies to improve your experience while you navigate through the website. Out of these, the cookies that are categorized as necessary are stored on your browser as they are essential for the working of basic functionalities of the website. We also use third-party cookies that help us analyze and understand how you use this website. These cookies will be stored in your browser only with your consent. You also have the option to opt-out of these cookies. But opting out of some of these cookies may affect your browsing experience.
Necessary Always Enabled
Necessary cookies are absolutely essential for the website to function properly. This category only includes cookies that ensures basic functionalities and security features of the website. These cookies do not store any personal information.
Non-necessary
Any cookies that may not be particularly necessary for the website to function and is used specifically to collect user personal data via analytics, ads, other embedded contents are termed as non-necessary cookies. It is mandatory to procure user consent prior to running these cookies on your website.
SAVE & ACCEPT
X